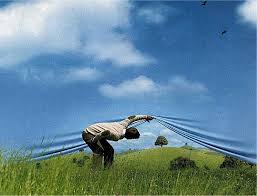 Illusions are phenomena that appear in dreams, fantasies, and phantasms. With further inferences, all phenomena that arise quickly, remain briefly, and then disappear equally quickly can also be thought of as illusions.

Dreams are illusions because the dream world lasts for a short time. If one dreams for a hundred years continuously, would that be an illusion or reality? Of course it would still be a dream because the moment that the person wakes up, the dream would disappear, so how could the dream not be an illusion? It can be concluded that no matter how long a phenomenon exists, as long as it disappears completely at some point, it too must be an illusion. Thus, it is possible to conclude that life is an illusion because even someone who lives for a hundred years will eventually disappear altogether, so why would that be different?

Having dreamed throughout the night, we wake up in the morning, and no matter how much we twisted and turned during our dreams, we no longer care about anything that happened in them because after all, they were fantasies, dreams, and illusions. A dream will not affect our mood or state of mind too much. Here is the question: since we have deduced that life is an illusion, is it necessary to be sad for our twists and turns in life? Is it necessary to be anxious about things in our life; is it necessary to struggle hard for things and hunger to reach goals; is it necessary to make others behave according to our own wills? When the illusion of life disappears, will it not float away as a dream ?When the earth we live on disappears completely in the infinite universe and all of humanity disappears as an illusion? What about a single person?

To analyse and judge this question, I want to wake you from your dream to let you not be a human being, but rather a Celestial being. When you wake up, will you still go into your dream to be nostalgic for something or to fight for someone in your dreams? Of course not, because it was an illusion; a fantasy. Well, life is also an illusion and a fantasy, so shall we be racked by people and things in this illusion? Of course not!

Who remembers their grandparents’ grandparents? Not to mention the fact that the memories of our grandparents’ grandparents are already blurred even in the incomplete memories of our grandparents. Who will remember us a hundred years after we die? We take for granted that we have importance in the present, but that is a complete illusion. Many great historical figures have died. They thought that they were important back then, but what about now? The earth goes on turning and humans go on reproducing. The footsteps of civilization never stop marching forward, so it is unnecessary to be too sad when people around us die because death is a normal phenomenon and everyone will die, including ourselves, so never be overly anxious, fearful, or sorry because it is all an illusion.

Nobody can control your dream, who can even control their own life?

It is delusional to think that if you do something, you will get something. That is impossible! You cannot secure yourself against all risks and dangers. How can people control your life? You cannot wear shoes when you are supposed to be barefoot and you cannot stay on the mountain when you are supposed to leave. Cold shoulders cannot be expected when you are thriving and on the way up. That every cloud has its silver lining may be forgotten in despair and adversity. Therefore, never force yourself to learn, suppress yourself to work, or force yourself to do what you dislike and which is against your own better judgement. No matter how successful you are, outstanding or a billionaire, or how glorious your family reputation has been flowing down through many generations, when you wake up, all will have been a dream.

Affection and love tactics are the most difficult traps for people to escape; they are the most terrible traps in life. “Ask the mortal world what love is? It drives one mad to death.” Now think about it, life is but an illusion. After waking up, everything will be nothing, so is it necessary to be bogged down on affection and love? It might actually be better to live as a beau; a dandy!

What people fear most is losing what they own and are most attached to： their property, their power and status, their reputation, and of course their most beloved lover, however they are not at all necessary. What really belongs to you and cannot escape is yours, but if it is not yours, you can not keep it. Anyway one looks at life, it is still an illusion which can be shattered and vanish in a moment, so why make yourself suffer for it? Why not enjoy a natural and unrestrained dream?

Has anyone in history been so intelligent and so powerful that they could control everything? Not one! Everyone is acting in a play; they are playing roles; following scripts. If anyone could control all things with their wisdom and power, their fortunes would be as boundless as the East China Sea and they would live a very happy, healthy, and eternal life – forever. Have there been any? Not one! This proves that man is only a grain of sand in a sandstorm, a drop of water in the sea, and that nothing can really be controlled by anyone. So why not just follow predestined relationships and take things as they come? Life will be easier and more natural.

People expend a lot of time and effort on their health and appearance, yet regardless of their daily exercise and nutritious eating habits, the sick are still sick and the short-lived still come to untimely ends. No matter how much paint and powder one applies to their face or how much plastic surgery they undergo, wrinkles still creep onto the forehead and cheeks as time passes, and signs of ageing become more and more visible everyday. These changes cannot be resisted, so why try to fight them when you know that you cannot? Life is too short! Fiddle with this today, fiddle with that tomorrow, and remain confused. You will still get old, fade away, and die. It is a bad deal to live in fantasies but an even worse one is to indulge them.

Do you worry? What do you worry about? You were worried when you were dreaming. What about when you woke up? My point is that there is no need to worry about anything because ALL of life is ultimately only a dream. There are no real scenarios because life will end. Will all the worry not be gone with the wind? Enjoy the present, do not worry about tomorrow or the next day. Everyone’s life has been predetermined by their destiny – their script. Worry is useless, so why persist with this fantasy, waste your recreation time, and ruin your relaxed mood.

Your state of mind is different when you are asleep than when you are awake. Sleeping people lead befuddled lives in their dream worlds of obsession, worry, anxiety, sorrow, and fear, however fully awake people know that all is but an illusion, so they have neither strong bliss nor intense grief, but are just pleasant, relaxed, and calm. Who are these people? Celestial beings, of course!

Within the universe, everything is an illusion except for the Greatest Creator. People live in illusions because all LIVES are illusions. In this sense, illusions are reality; illusions are stages of LIFE. People live one dream after another and live a large number of dreams throughout their lives because lives consists of dreams. Although people live in illusions today, this is really the entirety of human life. Never expect to lead a real life without it being an illusion. Even the Thousand-year Would, the Ten-thousand-year World, and the Celestial Islands Continent of the Elysium world are all illusions. The differences are that those illusions are more beautiful and splendid and go on much longer.

It is very clear that everything is an illusion, but most people are too stubborn, obstinate, and perverse to see them as such and are convinced that they are living in reality. When one awakens from their dreams, their soap bubbles will burst and they will say goodbye to their dream, but they will do it unwillingly and with disappointment and frustration. Knowing that life is an illusion, how does one lead a wonderful life?

Whatever it is that makes you happy, joyful, free, and blessed; just do it!Follow your best judgement – have fun, then play!

If something bothers you but you need to do it, make a perfunctory effort.

No fun: see you later! Better yet: never see you again!

Looking for your True Self (I)

(Translated By Transn and Edited by Kaer) Who are you and…