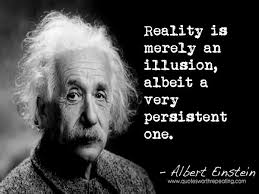 Reality is illusory and material; illusions are real and non-material.

Reality is like a dream, an illusion, a bubble, and a shadow; “As dew and lightning, thus should you meditate upon them.” Every illusion is real and true, is where the real spirit and soul dwell, and where the great universe is.

Visualized prospects are illusory, but according to the principle of visualized thinking, it is they that determine the future.

Love is illusory, but it can inject huge spirit and soul energy into people.

Heaven is illusory, but we all want to go there; as long as we dream of heaven, we will be able to overcome the hardships of life’s journeys and lead optimistic and positive lives.

Dreams are illusory, but when we are in dream worlds, the illusions look very real.

We think of our day to day lives as being real because everything in them seems very real and true, but what is the difference between the truth of reality and the truth of dreams? One day, when we finally leave this real world and wake up in another “illusory world”, we will find out that life is only a dream, an illusion!

What are illusions; what is reality? The bygone is like mist and smoke, like a dream or a fantasy; the future truth is illusory and looming. “To walk slowly or quickly, there are many roads to take in life; to take with good means or bad, in the end it is all empty.” “The wilderness where foxes sleep and hares walk was once a dancehall; the bleak and desolate field where flowers and grass grow was once a battlefield.” The bygone realness now becomes illusory and the illusion of the future will evolve into reality. Reality comes from illusions and will return to illusions; illusions originate from truth and will become reality.

Everything is but a game; only the soul is true; reality is a game.

Those who obsess with reality and are trapped in it are confused; those who take delight and fun in it are awakened; it makes no sense to try to hold on to the reality of a dream.

Therefore, the nonmaterial structure of LIFE is ultimately, absolutely real, however reality and illusion are dialectical.

Once you understand the dialectical relationship between reality and illusions, you should not be lost in reality, consume your time and energy on things there, cling to and worry about them, seize, possess, compete for, or persist after them. You should take reality as a stage in a game and play it to its fullest. As long as you get happiness, joy, freedom, and blessing, then your life is successful, wise, and full.

To own nothing is to have everything. Not to act is to act. Hold fast to illusions and you can have reality. Having reality is after all, an illusion.

The Road Map of Life and LIFE

(Translated by Conglong and Edited by Kaer)  Lifechanyuan faces directly to…

The Poor Can not Enter into Heaven

(Translated by Treasure and Edited by Kaer) This is a cruel…